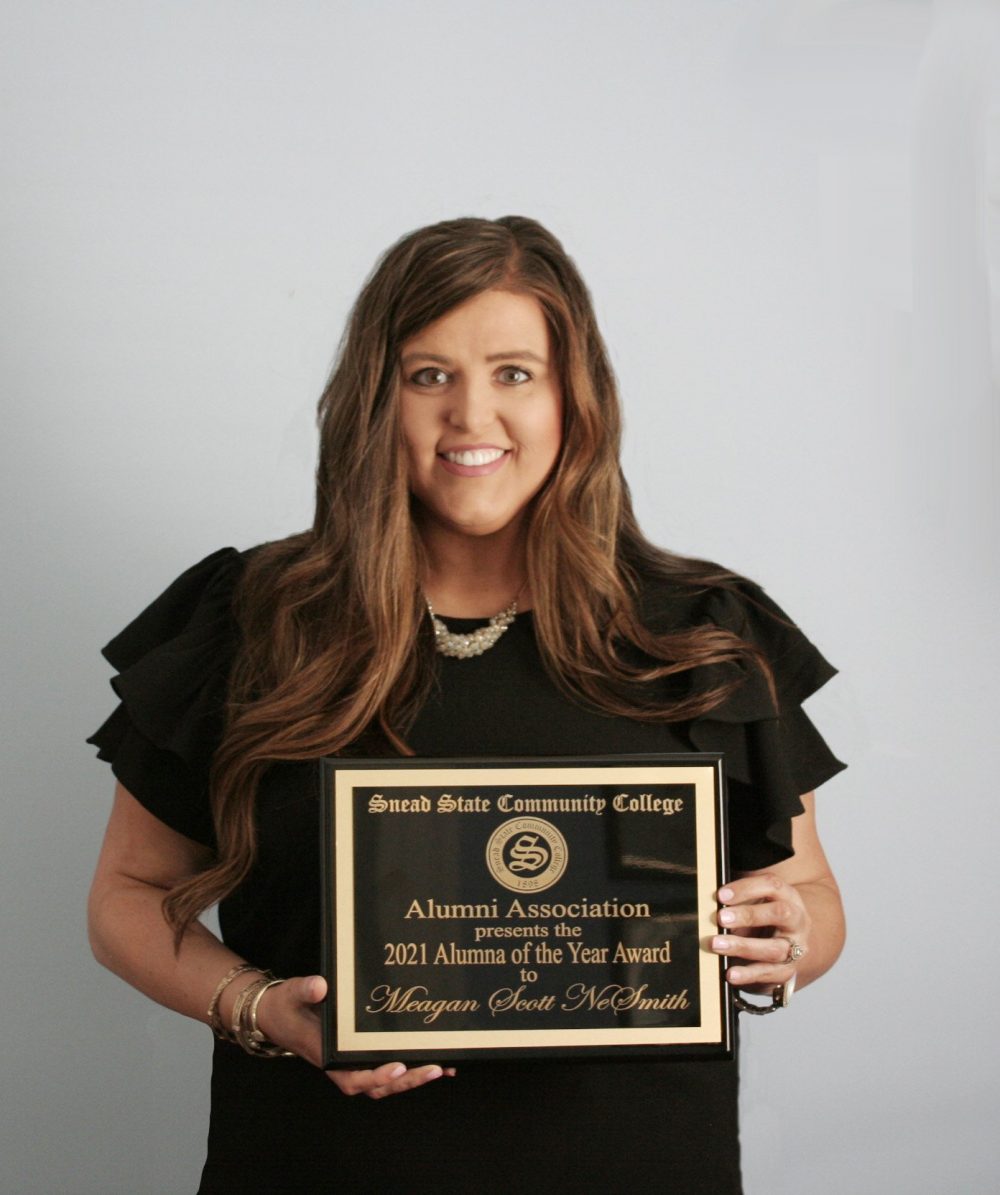 After having to cancel the 2020 event due to the COVID-19 pandemic, the Snead State Alumni Association hosted a successful Alumni Homecoming on Friday, May 7.

The Blue and Gold Picnic featured entertainment by Brandon Elder and accompanist and outdoor games for the entire family. Alumni Association representatives also presented the 2021 Distinguished Service Award and Alumna of the Year Award.

This year’s Alumna of the Year was unable to attend the event, but her husband accepted the award on her behalf.

“With the unusual times we’ve lived in, some of the unsung heroes who have worked the front lines of the COVID-19 pandemic are our healthcare workers. Our Alumna of the Year is one such hero who has dedicated her life to helping others as a nurse,” said Alumni Association President Cherri Barnard as she presented the award to Meagan Scott NeSmith of Boaz.

Mrs. NeSmith graduated from Snead State Community College in 2009. Since that time, she has held many positions and titles as a registered nurse throughout her career. After graduating with her Associate degree, Mrs. NeSmith began working for Marshall Medical Center South as a registered nurse in acute care. In 2011, she became a house supervisor in addition to being a nursing clinical adjunct instructor for Snead State. In 2013 she became a nurse manager over acute care. In 2015 she assumed the position she holds today as the director of inpatient nursing services.

In 2012, Snead State promoted a campaign called Finish What You Start. Its purpose was to educate potential students and the community on the value of an Associate degree. Mrs. NeSmith was one of the alumni featured in this campaign. Here is what she had to say then about her time at Snead State Community College.

“My time at Snead greatly influenced and shaped my life. While at Snead, I built many relationships and made a lot of great friends. Nursing school opened many doors for me. Every day, I use the skills and knowledge I learned while at Snead State. While doing clinicals through the nursing program at Marshall South, I was able to become familiar with the facility and confident in my decision to pursue a career at MMCS. Snead was a great stepping stone for me to earn a Bachelor’s degree through the University of Alabama’s mobility program.”

She is married to Adam NeSmith and is the daughter of David and Sherry Scott. Her family attended Alumni Homecoming on her behalf, but Mrs. NeSmith later had her photo made accepting the award.

“Meagan is an example of how the legacy of Snead College has impacted the lives of many since it began in 1898,” said Mrs. Barnard.

The Distinguished Service Award was given to a Boaz resident who has played a pivotal role in preserving the history of Snead State as well as the City of Boaz.

Wayne Hunt is a graduate of Boaz High School who also served in the U.S. Navy from 1977-90. He achieved the rank of Petty Officer First Class. He began school in San Diego, Calif., on to first duty station in NATO at Kolsaas, Norway.

Later, his Navy travels would include Jacksonville, Fla., Crete, Saudi Arabia (serving on the Middle East Force Commander Staff), Greece, and Norfolk, Va. He received two awards, the Navy League Award for Excellence in Leadership and Middle East Tanker War and Conflict in Libya Award. After leaving the navy, he worked with the Boaz Police Department, and in 1994, he started his own business, Wayne’s Woodworks, where he was a craftsman of cabinets and furniture for over 25 years. He presently works with the City of Boaz.

He is married to Bonnie Hunt for 28 years with two daughters, Kelly Weatherly of Boaz, and Lindsey Salee of Colorado. He and Mrs. Hunt have two grandchildren. His service to the community was passed down to him by his parents, the late Joe Hunt and Catherine Hunt of Boaz. His parents were owners of the former Hunt & Wright Hardware Store of Boaz and served the community and their church.

“As a result of this, there have been too many times where he has had tears of joy being a mediator between family members and enlightening them with their family history they never knew or just bringing old family members together. He loves sitting and chatting with people learning about their past. He also speaks for associations and clubs. He proudly wears the name of Boaz Historian,” said Alumni Association Assistant Lindsey King.

“Wayne’s roots and upbringing have served him well. He is a man of compassion and integrity. His friends and family will tell you that he is honorable, genuine, and trustworthy. His values and faith mean a great deal to him, and they serve as a daily guide in all he attains to be and do,” said Mrs. King as she presented the award to Mr. Hunt.