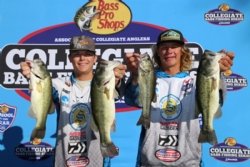 Garrett Warren of Guntersville and John Owens of Guntersville were named the overall winners among 350 of the top collegiate anglers in the nation after weighing in a total of 27.15 pounds over the two days.

“We were coming out here to win. We wanted nothing more or less but to win. It feels awesome. It feels like a real accomplishment to finally get a win under our belt. It feels nice to finally get it done,” Garrett told Bass Fishing News.

John added, “I’m just speechless. It’s just awesome. Had a good weekend and executed as much as we could.”

“All the credit goes to our young people,” said Fishing Team Sponsor and Snead State Instructor Dr. Tom Warren. “I started recruiting our core group of leadership when they were in the 10th grade and knew when they were sophomores in college that the team would have the potential to do something special.  Three to four years ago, I sold them on an idea that a small two-year college could not just compete but (also) beat all of the SEC schools for a championship. Today that vision became a reality because our team bought in and have worked together towards a common goal.  Last year Garrett was on a team that finished 2nd at this event by one ounce.  So to see Garrett and John overcome obstacles and become champions is a true story of perseverance.”

The Snead State anglers led the competition on day one after weighing in 17.85 pounds.

“I made a clutch catch (the afternoon of day one). I flipped up a three pounder. That’s what really helped us out (on day one),” John explained.

The clutch bite allowed the team to best their second place competitors by roughly three and a half pounds.

“We would like to thank The Tackle Trap for supplying the correct baits for the win.  Also, our title sponsors Nissan of Gadsden, Freedom Marine, and K&G Metals helping to fund our trip to Arkansas,” said Garrett.