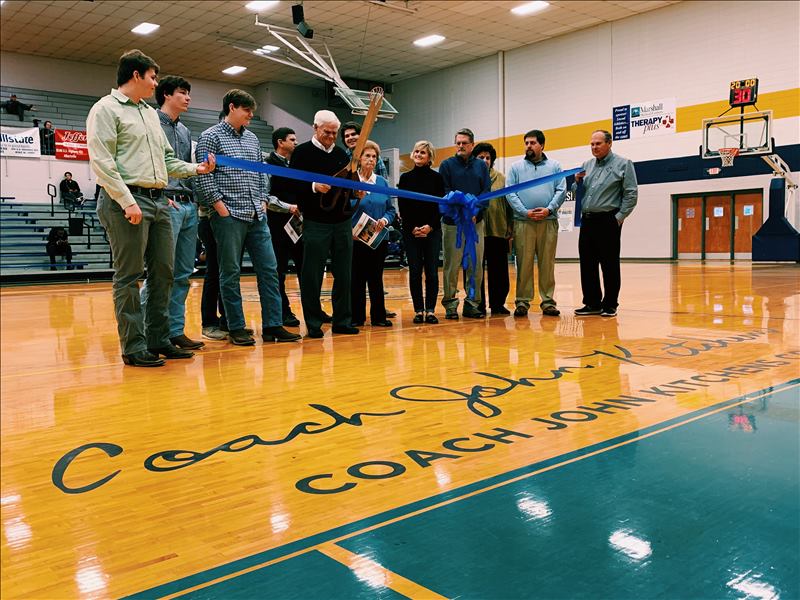 Over the years, Snead State Community College fans would watch him pace along the sidelines in the Plunkett-Wallace Gymnasium, coaching his team to victory. Since his retirement, Coach John Kitchens can be found occupying his favorite seat in the bleachers, cheering for Snead State.

But on Saturday, Feb. 8, surrounded by his family and Snead State representatives, Coach Kitchens stood on the court that will now bear his name as a reminder of the lasting impact he left on the College and the community.

In a formal ceremony held between the basketball games Saturday, Snead State President Dr. Robert Exley joined Coach Kitchens in cutting the blue ribbon dedicating the Coach John Kitchens Court. The bleachers, filled with the Coach’s former players and managers along with the Parson fans, erupted with applause – a testament to the legacy left by Coach Kitchens.

Coach Kitchens coaching career started in 1959 at Carlisle Park in Guntersville, where his Cubcats went 9-10. Coach Kitchens’ first job as a high school coach was at Eva High School, and his team was named county runner-up in 1961. During his tenure at Eva, his record was 30-24.

The unforgettable years of his career came during his tenure at DAR, where he won a state championship and placed second and third at the state championship. His Patriots won four consecutive county championships – 1965, 1966, 1967 and 1968. When Coach Kitchens left D.A.R. for Northwest Junior College, his record was 159-36. After a 19-26 record at Northwest, he headed to Snead State Junior College.

The Alabama Community College System Board of Trustees unanimously passed a resolution in October honoring Coach Kitchens for his years of service and his coaching accomplishments in addition to approving the naming of the basketball court.

A special reception was held in Coach Kitchens’ honor on Jan. 11, during which Dr. Exley and NJCAA Chief Executive Officer Chris Parker presented Coach with a plaque and a framed copy of the resolution. The reception also served as a reunion as about 75 people – including family, former players and managers – gathered around their beloved Coach, reminiscing and sharing stories of their time at Snead State and of the many practices they had with Coach Kitchens.

The official court dedication had to be postponed until Feb. 8 due to inclement weather, but though three weeks had passed, the atmosphere of the dedication mirrored that of the reception.

“It’s been a great time honoring a fine man who exemplifies all of the qualities Snead State is known for – hard work, excellence and caring. Coach Kitchens is not one who seeks the spotlight, but watching him interact with former students and seeing how much they care for and respect him is evidence of how well deserved this is. Naming the basketball court is a small gesture to express our gratitude for the dedication and support Coach Kitchens has given the College and our students,” said Dr. Exley.

The College placed a temporary decal on the court for the Dedication Ceremony, but when the gym floor is replaced this spring following the conclusion of basketball season, the name Coach John Kitchens Court will be permanently painted on the floor – a reminder of the legacy that lies within the Snead State Athletic Program.