The results of one idea from one instructor voiced four to five years ago were realized on Thursday, Oct. 10, at the Open House held for the new greenhouse on the campus of Snead State Community College.

The greenhouse is a project taken on by the College’s Science Department, with Instructor Dr. Tom Warren taking the lead.

“This has been a culmination of a bunch of different people coming together for a common goal, and that’s for our students. Four or five years ago, I went to my Division Director Mrs. (Deborah) Rhoden and said I would like to teach a horticulture class. We sat down and started developing the framework, and I started teaching a class called Special Topics in Biology. The class wouldn’t transfer, but I had about 12-15 students to sign up for it.

“Somewhere along the way, Auburn University started working with us, and now we offer four classes that are related to Ag or Horticulture that will transfer to Auburn University,” said Dr. Warren.
The greenhouse was constructed over the summer and has already been an impressive addition to the campus. Dr. Warren and his students planned and implemented the landscaping around the greenhouse, which was showcased for members of the community, employees and elected officials on Thursday.

The greenhouse was funded in part by two grants – one from the Marshall County Legislative Delegation and one from the Alabama Mountains, Rivers, Valleys Resource Conservation and Development Council. Senator Clay Scofield and Representative Kerry Rich attended the Open House to offer their congratulations on the project.

“As you know, agriculture is very important to me, and it’s very important to the State of Alabama. It is still our No. 1 industry, and it’s going to continue to be our No. 1 industry. With the world’s growing population, we have to be smarter in how we grow food. We have less and less land that we can produce food on, so turning out students who have a better idea of how to do that and come up with better solutions is key. California is the No. 1 agriculture state in the country, but there are laws they are passing on water and other animal restrictions that are pushing agriculture out of that state. I would like for the State of Alabama, especially our area in Marshall County, to pick up that business. This (program) is the beginning of how we do that. I applaud Snead State for bringing agriculture back to the campus,” said Sen. Scofield.

“I’m very proud of this greenhouse here and the students who are going to go through this program. I want to congratulate Snead and all the people who have been involved in this for making this possible,” said Rep. Rich.

Mike Roden and Drayton Cosby were also at the Open House and presented a check for $8,600 in grant funding to the College.

Mr. Roden said, “One of the things we’re about at the AMRV is the sustainable use of our resources and also improving the quality of life for the people within our eight county area of North Alabama. This project does most of those things. We congratulate Snead State for having the vision to do this.”

“I just want to congratulate you on a great job. It’s amazing what accomplishments you can have just based on one idea. With hard work and pulling together the right team, you can accomplish your goals,” said Mr. Cosby. 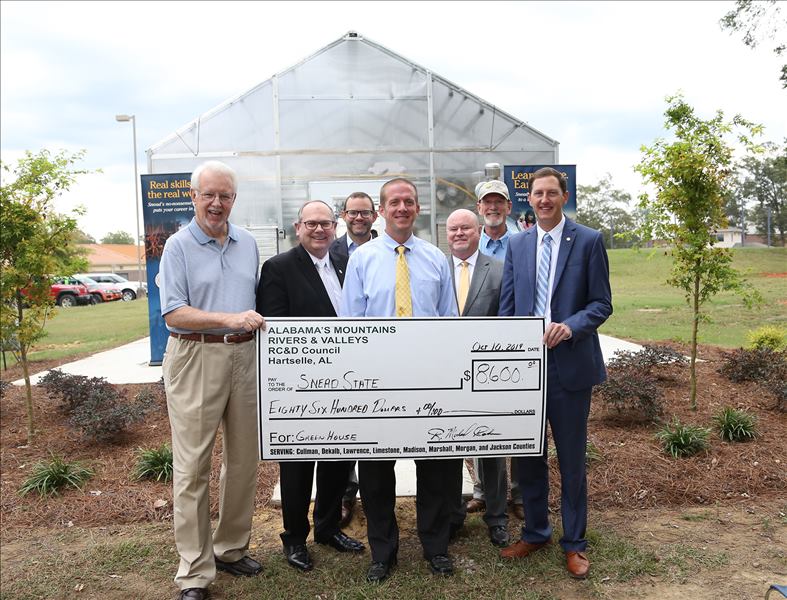