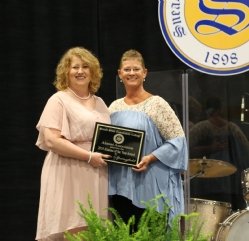 The Snead State Alumni Association saluted the College’s history at the annual Alumni Homecoming on Friday, May 3.

Inspired by the State of Alabama’s Bicentennial, the theme for this year’s Alumni Homecoming was “Snead Through Time,” a salute to the College’s legacy that began in 1898. Snead State History and Political Science Instructor Grover Kitchens presented a brief look at the College’s beginning as a Methodist seminary to its current place in history as a community college. With a nod to the college’s religious ties, the entertainment for the event was provided by gospel quartet Gold City.

The evening concluded with the recognition of the 2019 Alumna of the Year award. Alumni Association President Cherri Barnard presented the honor to Rhonda Springfield, Snead State Class of 1980. A former president of the Snead State Alumni Association, Mrs. Springfield attended Snead State on a performing arts scholarship and earned an Associate in Arts degree. She then went on to earn a B.S. and M.S. in Education from Jacksonville State University, a vocational certification from Athens State, and an Ed.S. and Administrative Certification from the University of Alabama.

Mrs. Springfield not only served our community as an educator and a counselor, but she also served as a leader. She served as President of the Marshall County Christmas Coalition and as a United Way Campaign Co-Chair. She also continued her association with Snead State by working as a GED Test Administrator and part-time Continuing Education Instructor. She recently accepted a position as Adult Education Program and Grant Administrator for Northwest Florida State College.

“There is so much more I could share with you about our Alumna of the Year recipient. But I believe the most important thing I can share with you about her is that she embodies the legacy of excellence and service found here at Snead State,” said Mrs. Barnard as she presented the award.