The AFTCO Collegiate Bass Open was held on Lake Dardanelle in Russellville, Ark. Lampkin and Warren finished in the no. 2 spot with a total two-day weight of 27.49 pounds, only missing first place by less than to ounces. The 200 plus boat field consisted of colleges from all over the country attempting to earn a spot in the Cabela’s Boat US National Championship later this year.

“This team is off to a fantastic start. Last year, we ended the season ranked in the top 15 nationally, and this year’s team is picking up right where we left off,” said Snead State Instructor and Fishing Team Sponsor Dr. Thomas Warren. “For these two guys to go to a lake we’re not familiar with and come away with a second place finish is a major accomplishment.”

The fishing team is in its fourth season. Dr. Warren, who teaches biology, horticulture and agriculture at Snead State, is optimistic for his team’s future.

“I was excited to have both of these guys come to Snead State this fall. Their names and fishing accolades are known for what they have done in the tournament fishing world. They could have gone and fished for about any other school in the south, so I am happy they are at Snead,” said Dr. Warren. “With the returning sophomores we have this year, this group has a chance to do special things this season.”

Anglers Eric and Garrett are incredibly thankful for the opportunity to fish at the college level. Eric is from Lake Okeechobee, Fla., and Garrett from Birmingham.

“For Garrett and myself, it has always been a dream of ours to stand on a college bass fishing stage, and we far exceeded our expectations at the AFTCO Collegiate Open on Lake Dardanelle,” said Garrett. “To come up short of the win by two ounces was heartbreaking, but it fuels the drive to work harder and get better.”

The duo thanked their families, friends, sponsors and Dr. Warren for their help.

“Hard work and in-depth research into this Arkansas River fishery most definitely paid off for Eric and I. This will fuel our future for upcoming events,” said Garrett. 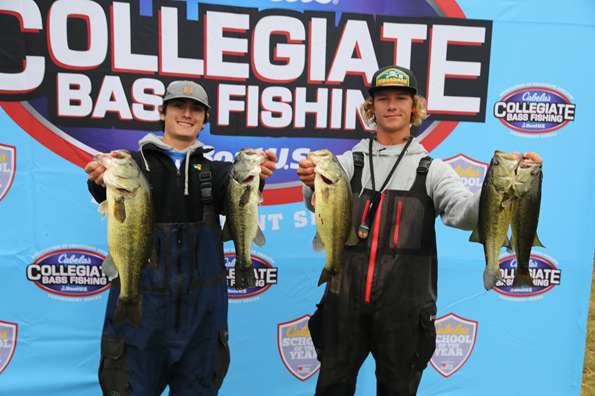