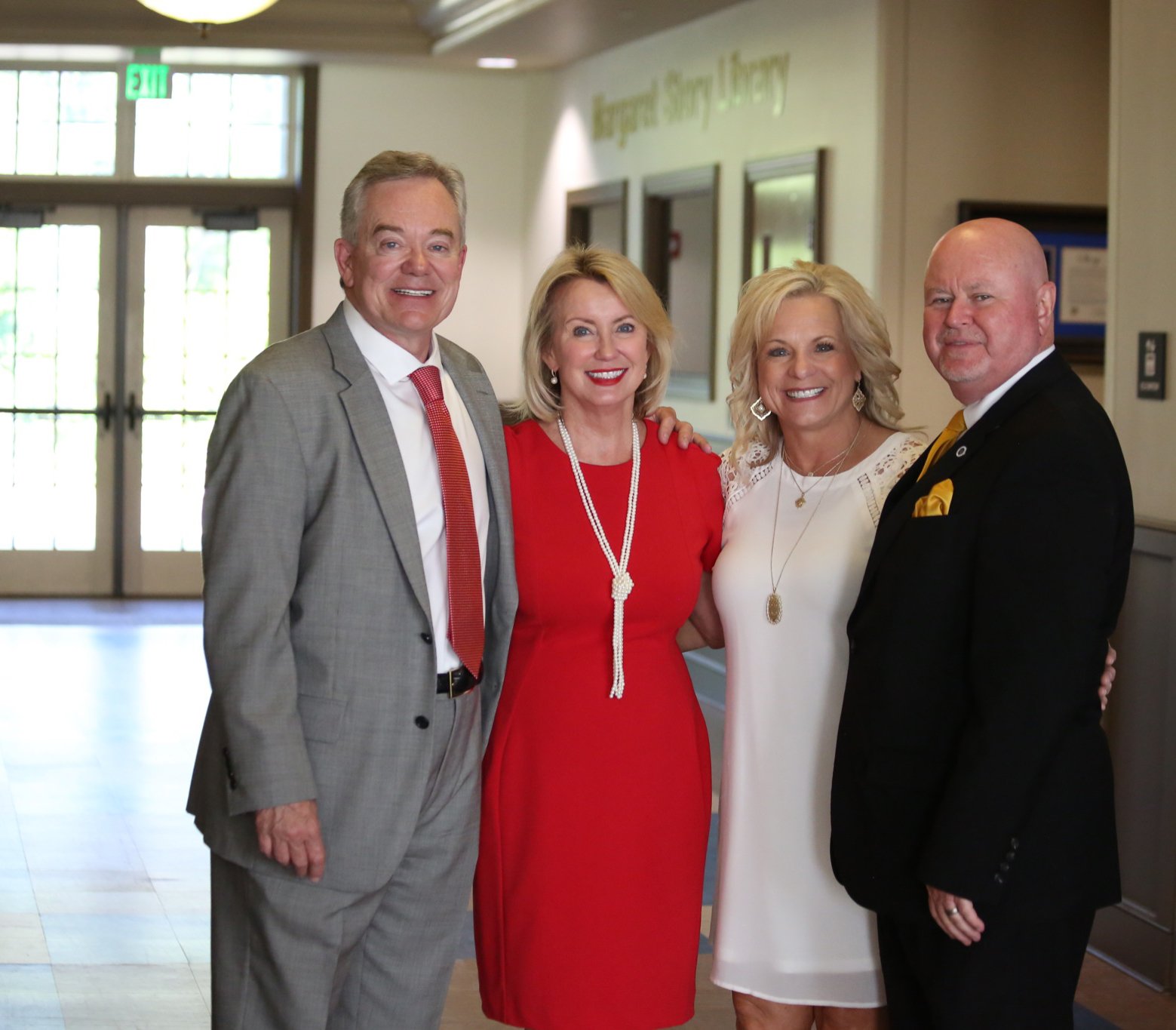 “Give back to people who just need a chance.”

The words were spoken as a challenge to those attending a day of celebration on Monday, May 16, at Snead State Community College. Though they were inspiration to the friends, family, community supporters, and college employees in attendance, they were also the motive behind the generosity of Snead State alumni Dr. Joe and Susan Nolen Story of Florida.

The celebration honored a recent contribution by the couple in the amount of $2 million – funds that will be used in many ways, including the development of a Career and Technical Training Center located on the campus of Marshall Technical School in Guntersville.

Dr. and Mrs. Story attributed their success to the foundation they received at Snead State. Both came from families who couldn’t afford to pay for their children to go to college, but through Snead, the Storys received what they needed to earn their education and achieve very successful careers.

Dr. Story spent two years at Snead State before moving on to the University of Alabama and graduating with a Bachelor’s Degree in Biology and then earned a Bachelor’s Degree in Anesthesia from the University of Alabama in Birmingham. He eventually earned his medical doctorate (M.D.) and served as chief resident in his final year of residency with UAB.

Dr. Story is a highly accomplished physician, medical innovator, and serial entrepreneur. He practiced medicine for more than 30 years before he retired in 2003. The current CEO of Story Enterprises, he has participated in the development of over $3 billion in healthcare, biologics, and medical ventures. He designed and developed the internationally recognized Andrews Institute for Orthopedics and Sports Medicine with world-renowned orthopedic surgeon James Andrews and Baptist Health Care System, serving as its founding President of Research and Education as well as Chairman of the Surgery Center. He was a partner in the development of “The Blake” award-winning assisted living and memory care facilities across the Southeast and was a founding board member in MiMedx, the largest public biologics company in the U.S. He also developed Tri-care Rehabilitation Centers, the Portofino Medical Spa (created and led the Executive Physical Program) and the Columbiana Clinical Research Company, which was recognized for national and international drug trials.

Mrs. Story spent 15 months at Snead and achieved two years of college credits before transferring to Auburn University and earning a Bachelor’s Degree in Industrial Engineering with a minor in Mathematics – something she did in just over two years.

Mrs. Story is a highly accomplished and successful leader in business, policy insights and strategy. She served as CEO and CFO of American Water Works, Inc., the largest water utility in the U.S., headquartered in New Jersey, before retiring in 2020. She was one of only 23 female CEOs of S&P 500 companies during her six-year CEO tenure. Prior to American Water, she worked for Southern Company for 31 years, starting as a nuclear power engineer for Alabama Power Company and serving in her last two jobs as President and CEO of Gulf Power Company in Pensacola and then as President and CEO of Southern Company Services in Atlanta. She currently serves on the corporate boards of Fortune 500 companies Raymond James Financial, Dominion Energy, and Newmont Corporation, and is a founding board member and current advisor of the New York Stock Exchange (NYSE) Board Advisory Council. She serves on the Moffitt Cancer Center Board of Advisors in Tampa, FL, and remains involved in Auburn University education efforts. She is a member of the Florida Council of 100 CEOs and Pensacola Bay Area Impact 100.

Through their Story Family Charitable Fund, the Storys are also co-funding partners with the Jackie Joyner-Kersee Foundation and the American Water Foundation on the roll-out of Joyner-Kersee’s “Winning in Life” program to children in five underserved communities throughout the U.S., as well as co-funding their local community’s First Responder Emergency Fund and other charitable efforts.

“Snead gave us a chance to realize our dreams and our hopes and what could be possible. As my wife and I give a little bit, we want to, in turn, give back to people who just need a chance. We also want to make Snead a bigger, greater place.

Mrs. Story stressed the significance of the role that an education at Snead State has in helping students achieve their American dream.

“We all have them. Everyone of us is where we are because of the people and the experiences that made us who we are. God has a plan for every one of our lives, and He accomplishes that plan, first of all, if we are willing to go along with that plan, but also by putting amazing people, places, and experiences in our lives that help us to get to that plan. This is all part of a plan, and Snead is such a big part of that,” said Mrs. Story.

The Storys told of the vital role Snead State played in their success, but the couple also shared the influence an education from Snead had on their families. Several members of Dr. Story’s family attended Snead, including his mother. Margaret Story began her college education after earning a GED. Eventually, she earned a Master’s Degree in Library Science and was named Marshall County “Teacher of the Year” on three different occasions.

Mrs. Story shared her story of her family growing up in poverty. Her father was in the military, and her mother was a waitress when they met. Her father, Tom Nolen, attended Snead State on the G.I. Bill after receiving his GED. He worked for a little more than minimum wage while taking classes and eventually earned certificates for technical training that prepared him for employment as a skilled craftsman.

“As we look back at those people, events, and institutions that helped make our American dream possible, we both think about Snead and how thankful we are for the opportunities the College gave us,” said Dr. Story.

“I want to thank all of you who are part of this great college. Sometimes we look at what we do every day, and we forget the significance of it. This college was established in 1898, and for 124 years, people’s lives have been changed because of you and the people who came before you. What you do is not just provide an education. You help lift people up. You help make people’s worlds bigger.”

“The pride we have to name the Administration Building after the Storys is well-founded. Their stories are two that became one story that we all can be proud of. We appreciate their generosity, but more than anything, we appreciate their example and their humble nature they have in recognizing the impact community colleges can have on lives today,” said Snead State President Dr. Joe Whitmore.

The recognitions did not stop there. Boaz Mayor David Dyar presented Dr. and Mrs. Story with a key to the city and offered his appreciation to the couple for their support of the College.

The Snead State Alumni Association presented Dr. and Mrs. Story with the Alumnus and Alumna of the Year awards for 2022.

“I hope that, as our students walk across our campus, as they see the Story name on the Administration Building, they will be reminded of the value of their education. As they hear your story and learn of how much you have given back to your community and to those who helped you along the way, I hope they are inspired. I hope your example shows them that the sky’s the limit when it comes to their future,” said Alumni Association President Cherri Barnard, who also serves in Snead State’s Workforce Development Department.

College representatives were not the only ones expressing their gratitude to the Storys for their generosity. Guests attending Monday’s celebration offered their own words of appreciation.

“We cannot thank you enough,” said Senate Majority Leader Clay Scofield. “I am particularly grateful and admire the fact that you chose to remember where you came from and your roots and what a special place (Snead State) is.”

“Thank you for the way you’ve challenged people, and that is part of what this is really all about,” said Snead State Foundation President Frank McDaniel. “I’ve been involved with Snead for some 30 years now, and I’ve seen some things develop along the way. When we’ve had an issue in the community, I’ve seen how Snead came to the forefront to help people and give them a hand up. Now we’re just moving another step forward with the generosity of what you’ve given.”

The ACCS Board of Trustees Chairman Blake McAnaly said, “What a great story you have, having come through this institution, being a part of the community, and coming back and giving. The greatest job in the world is to be a vessel that the Lord will fill up, that you can pour out, and He will fill you up again to pour out for His Glory. Thank you both so much for what you do and for what you’ve done for this institution.”

Jack Hancock, the Chairman of the Snead State Foundation Investment Committee, said, “Your contribution will greatly affect the students of the present and future.”