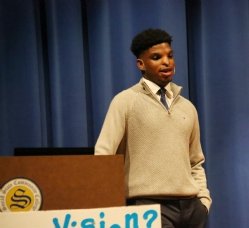 What is your vision? For one Snead State Community College student, the answer to that question hasn’t always been clear.

Described as a shy and quiet person, Justin Stewart of Huntsville has been placed in situations throughout his life that have put him out of his comfort zone – all because of something that happened to him when he was born.

Originally from New Jersey, Justin was born premature by a few months. He was diagnosed with Frontonasal Dysplasia, or more commonly known as cleft. Cleft is a rare disease that results in the atypical development of the head and face before birth.

“I was told the doctors had no idea how I was breathing on my own,” Justin said.

As an infant, he doesn’t have memories of that time of his life, though he’s been told about the challenges he overcame, including having surgery at the tender age of 6 months.

“The older I get, the more I realize what a big deal that was. I remember having face aches and swelling (growing up), and once every month or two, I would have sinus infections. I’ve come into contact with people with this condition since then, but they’ve had more difficult circumstances than I have. Nothing really slowed me down growing up,” he said.

With two brothers, one of whom is his twin, and a father who worked as a coach, Justin played basketball all of his life, including in high school. His twin brother, Jordan, plays football for Arkansas Baptist College. His older brother, Donald, whom Justin and his family call Josh, is a student and plays football at Stanford.

“I stayed involved in sports because that was a way I could connect with my dad,” Justin explained.

Growing up, Justin took notice of the people around him serving as role models and inspirations to others. But he didn’t see anybody “who looked like me.” He was bullied for being “different,” but his experiences shaped him to be the person he was looking for.

“I knew from an early age that I wanted to be a person who was making an impact. I had a relationship with an assistant coach (at my school) who encouraged me to come in and speak to his players.”

That opportunity began a journey for Justin he never expected taking but now wants to continue – the journey of being a motivational and inspirational speaker. That first opportunity led to others, but on Wednesday, Oct. 30, Justin experienced another first in his life. He led a workshop at Snead State Community College called “Smiling Within with Justin Stewart.”

The workshop was a bigger opportunity for him than any he’d had, and though he was nervous, he was excited to have the platform to share his story and offer encouragement to his college peers and the community.

“I want people to understand that just because they’ve been through something tough, it doesn’t mean they can’t have an abundant life,” he said.

Justin has also shared his story on Instagram and Twitter, hoping his social media profiles would be a platform for others to do the same. What he didn’t expect was for his social media to gain so much attention.

“One dad found me on Instagram and told me I made him feel more confident that he could achieve his dreams. I’m glad I’m able to connect with people who have similar stories and encourage them to live an abundant life.”

The graduate of Buckhorn High School is currently majoring in psychology at Snead State, but he has plans to continue speaking to groups and organizations and sharing his story. He wants to grow his social media to reach more people and encourage them to share their stories.