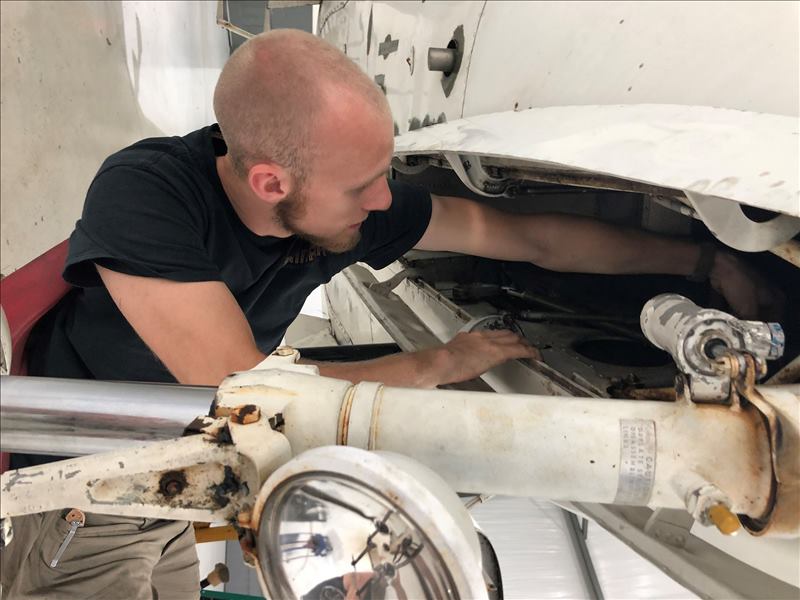 Caleb Jones of Horton has taken his love for airplanes and turned it into a career, thanks to the training he received from the Aviation College at Snead State Community College.

“I’ve always loved airplanes. When I was little, I dreamed of designing them, so I planned on becoming an engineer after high school. When I realized that the (Aviation College) trained aircraft mechanics, I decided to make the transfer, Caleb said.

The operation of the Aviation College, located in Albertville, shifted from Enterprise State Community College to Snead State in 2018. The program has since expanded to offer both Airframe Technology and PowerPlant Technology. When Caleb first enrolled, he was a student at Enterprise, though he took classes at the Albertville location. He completed the Airframe program about a year ago, which allowed him to obtain his Airframe license.

When the Aviation College transitioned from Enterprise to Snead State, Caleb also transitioned to be a Snead State Parson. In May, he became the first Snead State student to complete the PowerPlant program, and he recently received that license as well.

With a goal to obtain his Associate degree from Snead State, Caleb is already working as an Aircraft Mechanic at RainAir Aircraft Services in Albertville. RainAir is a premier aviation services company, specializing mainly in maintenance, repair, overhaul, and avionics services for general and commercial aircraft.

“It’s an interesting job, and there’s a lot of spontaneity from day to day. I’ve worked on everything from a Piper Cub to many large turbine aircraft. You never know what to expect. Today, I may be inspecting the wings. Tomorrow, I may be removing an engine. The next day, a damaged structure. It keeps you on your toes, and I love it,” he said.

“The classes I took at the Aviation College really gave me a leg up at work. There’s so much material you have to know to be a good mechanic, and I’m still learning a ton every day. The classes will take a subject and teach you the basics one bit at a time, rather than overwhelming you with material all at once. It’s a good foundation to build upon and makes transitioning into the workforce much easier.”

Caleb said his career is very rewarding, but he does offer advice to students considering a career as an Aviation Mechanic.

“You need to be mechanically inclined, but you also have to be incredibly conscientious. When you’re working on a multi-million dollar machine that flies people around, you have to give that the respect it’s due. You don’t just shoot from the hip and guess at whether something is fixed or not. You double and triple check everything that you do, to ensure that the airplane is safe to fly. It is very rewarding to see an airplane that you’ve maintained take off.”

Caleb plans to earn his Associate degree from Snead State in August.