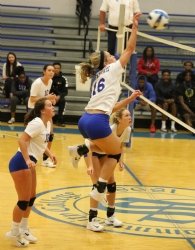 MacKenzie Buttram of Geraldine had 7 assists. Zuck led the team with 13 digs with Jordyn Garmon of Guntersville and Lily Hawkins of Crossville close behind with 12.

The Lady Parsons hit the road to take on Lawson State on Thursday, Oct. 12, beginning at 6 p.m.