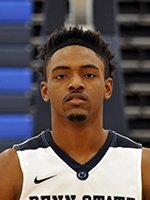 Ishimeal Nance of Muscle Shoals will play in the All-Star Game on Saturday, March 17, in Salem Virginia. Nance attended Snead State from 2014-2016, during which he played for the Parsons Basketball Team. His assistant coach while at Snead was current Men’s Head Basketball Coach Jeremiah Patterson, who was recently named the Coach of the Year for the Alabama Community College Conference North. Nance is currently a senior guard/forward for the Penn State Altoona Men’s Basketball Team.

Nance was selected to play in the All-Star Game after a two-day fan vote. He is the first player in Penn State Altoona men’s basketball history to earn a coveted spot in the national Division III All-Star Game.
Nance received a total of 58,907 votes during the fan vote period. His total accounted for 33 percent of the record 175,242 votes cast. Dalton Myers of York College (Pa.) was the top vote-getter, collecting 60,577 votes (34 percent). Both Nance and Myers were elected to the All-Star Game, as the fan vote rewarded the top two vote-getters with All-Star status.

“I just want to thank God first and all of my family, friends, teammates, coaching staff, and people across the world for taking the time to vote for me and pushing for me,” said Nance. “I want to thank everyone who voted because, without your support, I would not have this opportunity.”

Nance and Myers will join a roster of 20 total players – 10 on each team – with the remaining 18 players announced after the NCAA Division III Tournament semifinal round participants were determined.
“I am so happy for Ish and proud of him for everything he has accomplished since stepping on campus. He, along with his teammates, has helped take our program to new heights,” said Penn State Altoona Men’s Basketball Head Coach David McGreal. “After having a record-breaking season, it is good to see that we are being recognized on a national level, and Ish is the perfect vehicle for that, because without him, we wouldn’t have accomplished what we did. Thank you to everyone who voted for him. Without you, this wouldn’t have been possible.”

Nance’s selection to the national Division III All-Star Game is a highlight from what has been a season filled with accolades and accomplishments for the senior. He was voted the Allegheny Mountain Collegiate Conference’s Player of the Year while also taking first team All-AMCC honors. Nance led the AMCC in scoring during the 2017-18 season, averaging 19.1 points per game for a total of 515 points scored. He was also first in the conference in free throws made (127), second in minutes per game (32.4), defensive rebounds (166), total rebounds (212), and rebounds per game (7.9), third in field goals made (176), and sixth in steals (44). Additionally, Nance was named to the AMCC’s All-Tournament team for being among the top performers in the league’s postseason playoff tournament.