Four Snead State baseball players have signed to colleges to continue their academic and athletic careers.

“One of our main goals is to move our student-athletes on to four-year schools when they have graduated from Snead State. In order to do this, we push them to be the best they can be as students and as athletes as we give them an opportunity to play the game they love,” said Head Coach Gerry Ledbetter.

Right-handed pitcher Amos Willingham signed with Georgia Tech. The Chattooga High School graduate went 5-2 as a freshman with a 3.66 ERA. He recorded 48 strikeouts in just over 66 innings.

“I’ve been able to learn the balance it takes with school, practice and workouts at Snead State. Being at Snead has allowed me to face better players who are stronger and more focused than the competition I’ve faced in the past,” said Willingham. “I know I have to work harder now than I ever have and that I have to give Snead everything I have in order to become the best I can be.”

“Amos is a great student and a great player. He was a conference starter for us last year, and we expect a steady hand from him this year,” said Ledbetter.

Chelsea High graduate Joel Cheatwood signed with the University of South Alabama. He had 44 strikeouts as a Snead State freshman.

“I would not have gotten where I am today if it wasn’t for the coaches at Snead State,” said Cheatwood. “They are outstanding in what they do and are great mentors. They’ve led me down the right path and shaped me into a better man.”

“Joel is another conference arm for us. We expect to see some good things out of him this season,” said Ledbetter.

“The biggest thing the coaches at Snead have prepared me for has been the mental aspect of the game,” said McCollum. “Mentality is the number one thing the coaches work on because to be successful, you have to have a strong mind. With a weak mind, you can’t be as successful.”

“Brayden was a big surprise for us in 2017 and was a very good left handed hitter in last year’s lineup. We’re expecting a lot from him this season,” said Ledbetter.

“Without Snead State and its amazing baseball staff, I would not have been presented with this amazing opportunity. From day one, they have pushed me to be not only the best athlete I can be but to be a better man and better student as well,” said Scofield.

“Z always has a competitive attitude and is always in the game. He’s a great hitter in the top of our lineup,” said Coach Ledbetter. 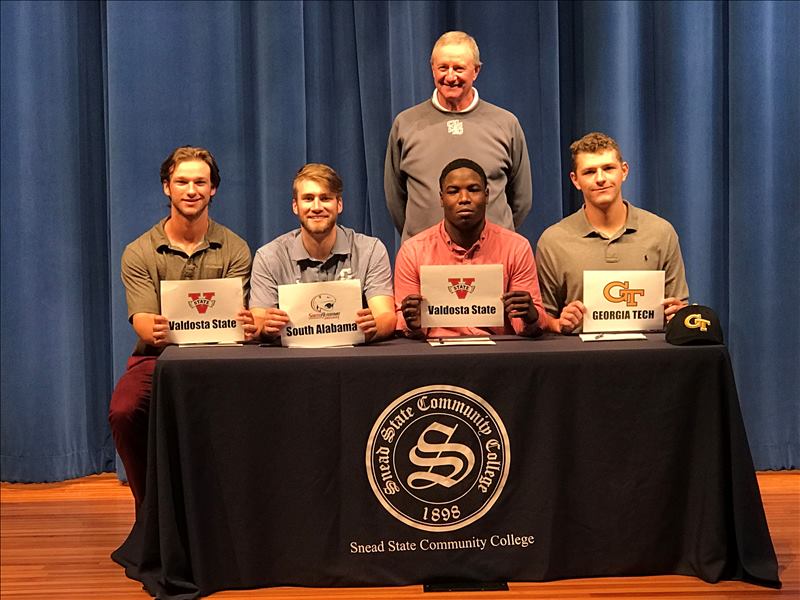