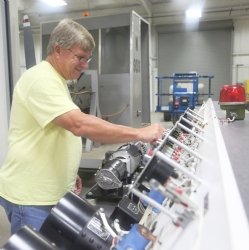 Darryl Cameron has always wanted to fly. He dreamed of earning his pilot’s license and getting his own airplane. Now, the Huntsville firefighter is getting closer to having his dream realized, thanks to the Aviation College at Snead State Community College.

After 25 years of working with the Huntsville Fire Department, Cameron decided to make a career change. He learned about the aviation program through his second job working at the Huntsville International Airport.

“I talked with a mechanic who works at the airport, and he advised me to check out the A&P program in Albertville. I came by to talk to them. If I was going to do it, now was the time,” Cameron said.

Cameron’s love for flying has been a part of him for as long as he can remember, but his life and career had taken him down a different path. When he was 26, he joined the Army Reserves and served from 1986 to 1995. After basic training, he went to warrant officer school, but when his military service ended, he opted to choose a job that would allow him to provide and raise his daughter.

“Once I decide to do something, I’m all in. I wanted to make sure I had all my ‘T’s crossed and my ‘I’s dotted. I wanted to do it right, and I wanted to do it right the first time,” Cameron said.
Cameron also works in construction as an installer of swimming pools. Despite being successful in jobs he enjoys, he never gave up the dream to fly. Already possessing an Associate degree in Electronic Engineering Technology, he’s now determined to earn an Associate degree in Aviation as well.

He completed the Airframe Technology program through the Aviation College, and he’s currently enrolled in the PowerPlant program. Completing both programs will give him the training to repair and maintain an aircraft when he’s able to purchase his own. After this fall, Cameron plans to take the exam for his FAA certification in Airframe so he can begin looking for a job in the aviation field.

Cameron admits he’s had challenges on his journey to a career in aviation, but he wouldn’t change a thing about his experience.

“I wish there was something like this when I got out of high school. If I had been able to do this then, where would I be now? I don’t just want to work in aviation at a facility. I want to travel. There are jobs out there where I could travel with an aircraft and be on hand to help with any problems that may arise. Aviation takes you places,” he said.

Cameron hopes to see the program at Snead State grow. He not only hopes to see more students take advantage of the opportunity, but he hopes the community and industries will continue to support the program.

“The instructors are committed to make sure the students do the job right. You have to have discipline, and you have to take it seriously. But there will always be a need for the knowledge you gain in this program. The sky’s the limit with aviation.”

Snead State’s fall semester began Monday, but registration is still open for the Fall Mini II term. Anyone interested in the Aviation program may contact the Aviation College at (256) 571-0623 or by email at jlowery@snead.edu.